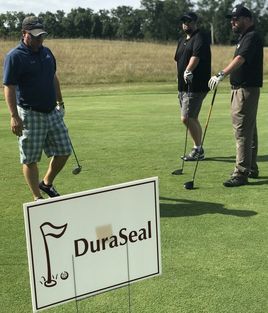 The annual CAA Golf Outing held August 7 2018 revisited the Delaware Golf Club for the second year.   Nearly 100 Golfers and dozens of sponsors gathered for a fun-filled day of scramble golf, games, food and networking.
Golfers were directed to their starting tee at 9:30 a.m. and made their way around the course throughout the day visiting with CAA Associate Members on their sponsored holes to play games, grab a snack or a drink and learn more about each product or service before teeing off. In keeping with tradition each sponsor made their hole stand out with various products, unique games and encouragement creating a light, jovial atmosphere for the golfers during the event.
At the Roto-Rooter sponsored hole, a Pro golfer allowed each team a chance at a better score while also raising $145 for the CAA Community Assistance Foundation. The Mike Rodriguez Multifamily Advisor SVN Wilson Commercial sponsored water cart and Feazel, Inc. sponsored the Bloody Mary and Tiki Bars helped keep golfers filled with liquids during the event. HD Supply took to the course mid-day to deliver the sponsored boxed lunches.  Mulligans were once again sponsored by FABCO and Ferguson Facilities Supply sponsored the scorecards.  BRG Apartments sponsored the cart, Mohawk Industries sponsored the 19th Hole after party and Redwood Living the dinner reception.  In addition, T&R Properties returned as this year’s Tournament Sponsor.
After roughly five hours of golf, golfers and sponsors enjoyed drinks on the patio before adjourning to the ballroom for dinner and awards swapping stories about their rounds and anxiously awaiting which team would take home the winning trophies.
CAA Executive Director, Laura Swanson opened the ceremony by thanking everyone for attending and had the privilege of announcing the winner of the 50/50 benefitting the CAA Community Assistance Foundation.  Dana Moore of Oakwood Management Company took home the $190 50/50 prize and an equal amount was donated to the CAA Community Assistance Foundation.  Swanson then had the pleasure of announcing this year’s winners.
There were four skins at the event with three different teams splitting the skins pot.  The Sherwin Williams Company team won two, followed one each by the Fristche Corporation and Environmental Pest Management teams. Additionally, proximity awards were given to respective winners:  Longest Drive: men, Ryan Smith and women, Jennifer Foppe; Longest Putt: men, Gabe Agacio and women, Jennifer Foppe and Closest to the Pin: men, David Black and women, Dana Moore.
Next, the 2018 CAA Challenge Cup champions were announced. The top three teams were awarded gift certificates and trophies.
The third place team was Overmyer Hall and Associates scoring a 62 in a score card tiebreaker.  The second place team was Fritsche Corporation with a score of 61 and finally, this year’s winners for the second year in a row the team from Environmental Pest Management with a score of 55.
The CAA would like to thank everyone who participated in the 2018 CAA Golf Outing.  We look forward to seeing you at a future CAA event.
A special thanks to our hole sponsors:
ABLE 444-Roof
America’s Floor Source
Affordable Housing Trust of Columbus and Franklin County
BELFOR Property Restoration
Chadwell Supply
Choice Property Resources
CORT
Davey Tree Commercial Grounds Management
DuraSeal
Environmental Management, Inc.
Ikos Holdings
Jetz
Joseph Tree Service
RentPath
Roto – Rooter
The Sherwin Williams Company
TNT Services
Wilmar